Warning: A non-numeric value encountered in /homepages/41/d828214771/htdocs/oldhtdocs/wp-content/themes/Divi/functions.php on line 5806 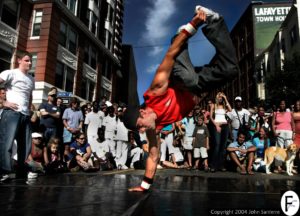 Jim has been teaching dance for over thirteen years. During this time he has taught  in several dance studios, in the South Portland school systems, in non-profit programs for at risk youth, at health clubs,  and at summer camps such as Breakwater Creative Arts. He has also instructed at state and private universities including Bates College. His primary influences are Breakdancing, Capoeira, and African Dance. Since 2012, he has continued his studies with:

In addition, Jim averages 45 to 60 hours per year in continuing education dance classes. He would like to send a thank you to all the mentors in dance he’s had over the years – especially to Sheila Bellefleur, Melissa Cloutier and Jesse Patkus. He would also like to say thank you to his friends, family and people in the community who have supported his endeavors in dance over the past twenty years.